Posies Ma
My name is Lucy and I have never blogged before. Well that's a lie. I have, but it was this one, and I neglected it for a little while... I live in a commuter town outside London having moved here about a year and a half ago after making some pretty big changes in my life. I share a beautiful little cottage on the Grand Union Canal with 1 crazy beautiful little girl and an equally crazy cat called Bandit (appropriately named as he now lives in all the houses on the street and steals...). Lawyer/working mum and it would appear, terminally single (I've reserved my spinster plaque already) I was fortunate to escape the evil commute about a year ago but seem to have less time than ever.... If I entertain you, make you laugh or fume (or make you have an emotion of ANY description) then my job is done. Enjoy x

What do you mean you don't like peanut butter??!

I've not exactly been showering myself in glory in terms of "mother of the year" lately.  I mean lets take last weekend as a prime example.  Instead of spending the bank holiday weekend with Madam I abandoned her (to her father obviously, I didn't leave a couple of boxes of cold Dominos in the kitchen and tell her "I wont be long") to go cover myself in glitter, don spandex and party in a field near Northampton at the glorious Shambala.  To be fair it was my birthday and at 33 years old it seemed utterly necessary to pop my festival cherry.  God that sounds so pathetic at 33...practically on the "Never Been Kissed" spectrum.  So yes, I had some time out and came back thinking I needed to step up my game this weekend to make up for it.

Now we, like most of the country and (if Buzzfeed is taken as gospel WHICH IT SHOULD BE) the world, are completely engrossed in The Great British Bake Off.  Pose provides full commentary and critique whilst I sit thinking how I'd quite like to enter GBBO but not sure the BBC would approve of the sweet looking 33yo baker swearing incessantly in the background.  Inspiration peaked by Ugne's PB&J ice cream roll (GET IN MY BELLY NOW), Pose and I decided to do a little mummy-Pose-baking-bonding.

Recipe - PB&J Cake Pops from my own head

Icing:
Slab of chocolate covering for cake (or chocolate,  but I had cake covering in the cupboard (as you do))

Method
1. Turn on the cake pop maker and spray the inside with a little cake release spray.
2. Sift the flour, baking powder and salt into a bowl.
3. Using a food mixer (or not, your call) beat the butter until pale and fluffy, then gradually beat in the sugar until its fully incorporated.
4. Next, reduce the speed and beat in the egg, the egg yolk and the vanilla.
5. Reduce the speed again to low and gradually add the flour and milk (alternating) to the mix until its all blended.
6. Spoon a little of the batter into each cake "hole" (about ¾ of the way), then dollop a little peanut butter and a little jam into the centre.  Spoon a little more of the batter onto the top (so its about to go over the brim).  Close and cook for about 6mins.
7. Once the cake pops are cooked, carefully ease them out and put on a wire rack to cool.  Make more batches.


8. Break the chocolate covering into even(ish) chunks and melt in a glass bowl over a pan of boiling water (or microwave it - I just don't have a microwave and yes I am ok with that). Once its all melted, take it off the heat.
9. Carefully put a stick in a cake pop (its a bit fiddly as the filling makes them a little unstable) and even more carefully dump into the melted chocolate and cover the whole thing in chocolate.  Put the cake pop cake side down onto the baking parchment.  Repeat with all the other cakes and let cool. 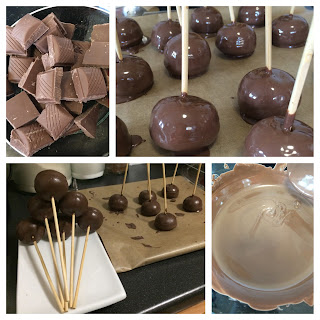 This was all a bit of an experiment not least because I'd never used a cake pop maker before so I was pleasantly surprised by the outcome.  Personally I think the texture of the cake was a bit close so I'll probably switch up the recipe a bit.  It could also be that the PB&J center affected the bake (ooooh I sound all Mary Berry!).  Regardless it'll need some refinement work which will mean a lot of tasting and then more tasting.